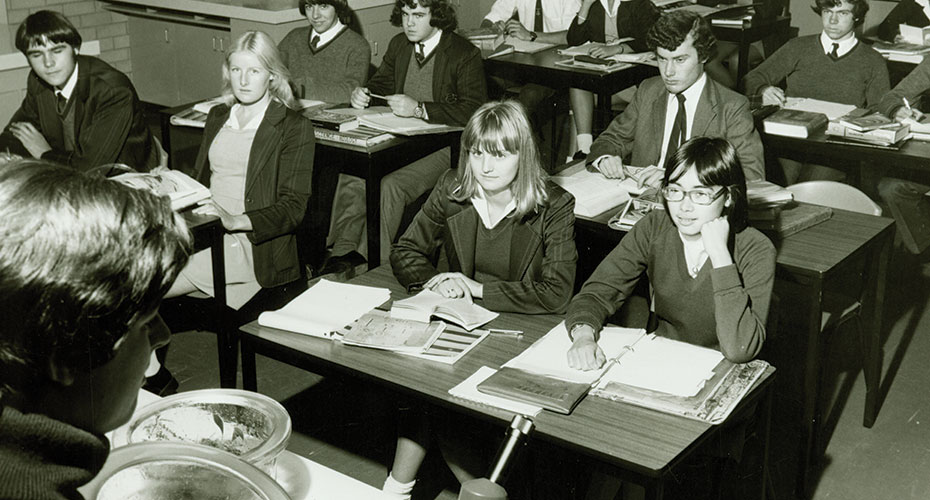 History of Girls at Barker

Barker was originally founded at Kurrajong, a small mountain village on the outskirts of the city by Anglican Archdeacon Rev. Henry Plume, who in 1890, enrolled four boys and a girl in the school's first class. They were all preparing for the Matriculation Examination to enter Sydney University. Evelyn Hill, acknowledged as Barker's first female student, matriculated alongside the four boys in her class, and went on to graduate with a Bachelor of Arts degree as Barker's first university graduate.

Plume had always intended when he opened Barker that it would be a coeducational school, and in the following year, the school enrolled 17 students, including the four Bowman sisters. Lottie Bowman, one of the four, proved to be one of Barker’s most successful Cricketers in those early days.

Today, Bowman Field, where many of the School's sports are played, is named in memory of Lottie Bowman.

We girls had to play cricket every Sunday afternoon with the boys. Sunday morning we had to translate a chapter of the Bible into French...We had ten minutes' recess at 11am but every one of us also had to take the cross-cut saw and saw the wood that kept the fuel stoves going.

Barker's innovative Senior School set a number of firsts for an independent school in Sydney. The research of the Headmaster at the time, Mr Trevor McCaskill, led him to conclude that a separate college for senior secondary students would provide a more appropriate educational experience for young people on the threshold of adulthood, with its smaller class sizes; its tutorial style of senior teaching; and its introduction of a strong system of academic care which cemented strong relationships between young adult students and those who taught and cared for them.

In the context of a senior secondary school that provided a deliberate bridge between school and university, for Mr McCaskill, coeducation was a logical and more natural way for young people to be educated.

On February 3, 1975, 59 girls walked through Barker's gates into a world of 1143 boys, an experience which may have been daunting for both genders! The girls came with many expectations – most were intent on taking advantage of Barker's very broad range of subjects and co-curricular activities being offered in a university-style learning environment. Some relished the prospect of being treated as young adults. Others wished to share in their brothers' positive experience of schooling. Still others came because they liked the idea of coeducation, and their parents saw it as positive choice.

For more information about Barker's proud history, visit the Archives pages on our website.

Boarding for girls was introduced in 1991.