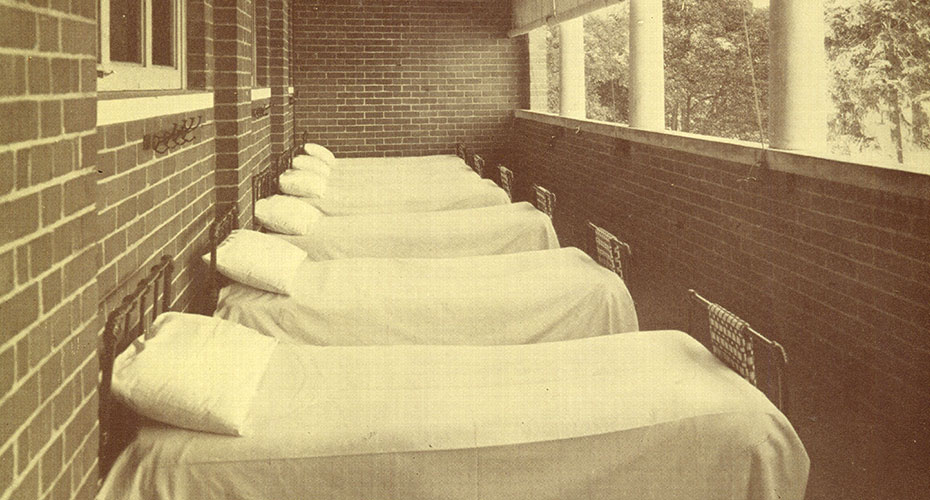 Barker College has always been a boarding school.  When Rev. Henry Plume first advertised for pupils in the Kurrajong area in late 1889, it was expected that Boarders would pay £18.18.0 per quarter. Of these early boarding school days, William Friend, a Boarder from 1892-1894 remembered, “At the beginning of a term, William, the Chinese cook and general hand, would meet the coach with a slide, drawn by Mr Plume’s sulky horse, and take luggage to the school, over about a mile of rough track.

The school house was a weatherboard cottage, with additions for dining room, classrooms etc. There was no electric light, no telephone, and house water was not too plentiful but we had a magnificent view over the Hawkesbury Flats, Richmond and Windsor. The Rev. Henry Plume was Headmaster and all the teaching staff.  He limited the number of boys to about eighteen, which in my day, included 3 day boys. We had an hour’s work before breakfast. We at first thought this innovation was to avoid afternoon work, but soon found our mistake.”

An outbreak of scarlet fever in Kurrajong Heights in 1894 forced Rev and Mrs Plume, together with their twenty Boarders, to move to Hornsby Junction the following year. Each Boarder was treated as if they were one of Plume’s own children, all sleeping in the newly built residence (the present day Stokesleigh), to which the dining hall and classroom were attached.

During the early 20th Century, boarding numbers were so large that Senior Boarders were moved into rented cottages adjacent to the school property. These Boarders were supervised by Resident Assistants and Student Teachers.

The opening of the Dormitory Block (the present day Carter House), the school’s first designated boarding accommodation, took place in 1920. Although harsh by today’s standards, it was a great improvement on the renting of cottages. The four dormitories were open to the elements, as school hygiene stressed the importance of fresh air. Electricity was non-existent at Barker until 1923 and hot water was not connected until 1938. It was the duty of the Prefects to ensure that each boarder had a cold shower each morning during both winter and summer.

As the school continued to grow, further boarding accommodation was needed. The Junior House (the present day Plume House) was opened in 1929 and provided designated accommodation for Barker’s youngest boarding students. Colin Ladds was enrolled in June 1941 and is on record as the school’s first five year old Boarder. The War Memorial Junior School, opened in 1955, included a dormitory and dining hall for these young boys. In 1967, the dormitory in the War Memorial Junior School became known as Leslie House and provided accommodation for Senior boys. With the refurbishment of the Junior School in the mid 1980s, Senior boys were housed in cottages acquired by Barker College in The Avenue. Although originally designed to be temporary, boarding in The Avenue ceased fifteen years later in 1998.

Boarding for Junior and Middle School students has been gradually phased out. Female boarders were introduced in 1991 and upon reflection, one of these Boarders wrote, “Taking into account the wonderful company, conducive atmosphere, bearable regulations and edible food, I suppose that boarding at Barker is, if not beneficial, at least educational and enlightening.”

Today’s coeducational boarding experience for students in Year 10-12, is therefore part of a long boarding tradition.