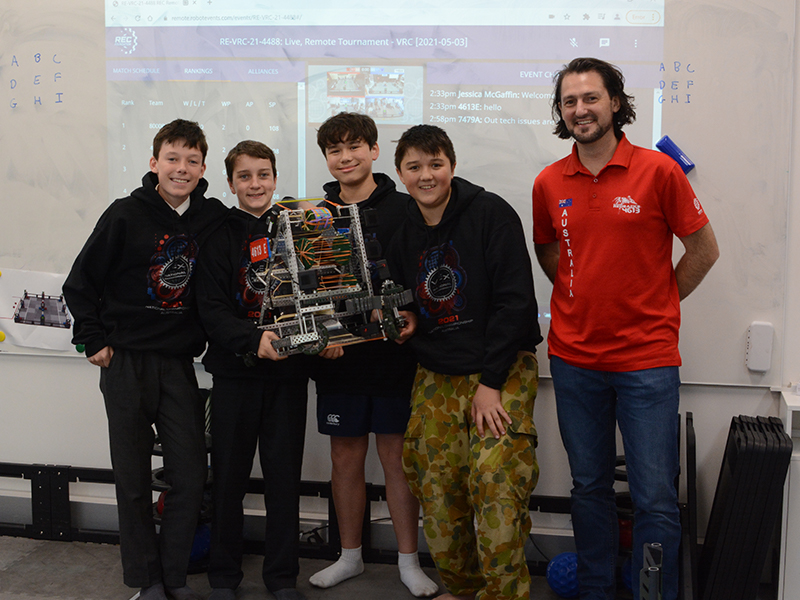 In 2018 we moved our Middle School Robotics program to the VEX Robotics Competition. Over the last four years this has allowed us to host competitions in Sydney and deliver a quality event that is unsurpassed in Australia. We’re thrilled to announce Barker Robotics’ latest achievement – qualifying teams to VEX Worlds.

Team 4613W – Hypersphere - built a simple but effective robot, and ranked #3 in Australia in Middle School level Skills Rankings, allowing them to get a last minute call up to Worlds.

Unfortunately travel restrictions mean our teams will not be able to travel to the USA for VEX Worlds. However, VEX created an innovative online system to allow teams to compete in Live Remote Tournaments, which took place in mid-May as The Barker went to print.

The last 15 months have been incredibly challenging for our High School students in the FIRST Robotics Competition (FRC). Normally the dedicated team gathers in early January to design and build a new robot for that year’s challenge.  However, since 2020, COVID has resulted in the cancellation of every in-person event – meaning two full cohorts have now progressed through the FRC program without an experience of competing with the robot they have designed. These cancellations have resulted in no small amount of disappointment and pain for the hardworking team.

In 2020, FIRST decided to cancel all events for another year, substituting them for ‘At Home Challenges’, allowing teams to demonstrate a range of skills challenges, with an aggregate of scores counting towards winning a division of teams from around the globe. Our students relished the opportunity, designing a special lightweight robot able to move at lightning speed and rapidly shoot accurately.

We are incredibly proud to announce our team had the highest scores in the Magnesium division for the ‘Power Port’ challenge (shooting accuracy), equal highest score for ‘Interstellar Accuracy’ (distance shooting accuracy) and the fastest time for ‘Galactic Search’. In fact, our scores were so good that based on raw scores, the Barker Redbacks are 6th in the world in global rankings!

On May 1 and 2, the team finally had the opportunity to play live in person at Macquarie University. Still under COVID restrictions, only six team members and two mentors were allowed in person, with the rest of the team watching live from home. The event confirmed our suspicion that this robot was special. Taking Rank #1 from our first game, the Redbacks never relinquished it, Captaining the first seeded Alliance, and going on to win the event.

There are many highlights of the robot worth mentioning, but there is one absolute standout. The team built a climber that drops a platform and allows other robots to climb on in the end-game. Worth a ranking point and an extra 25 points, it is as valuable as it is difficult to achieve. Many teams tried in 2020 unsuccessfully, so it is satisfying to say we are the only team in the world that has shown it in action reliably and dependably. A fitting showcase of the team’s growing abilities after two years of challenge. We are superbly proud of all the team has achieved through their perseverance, dedication and resilience.