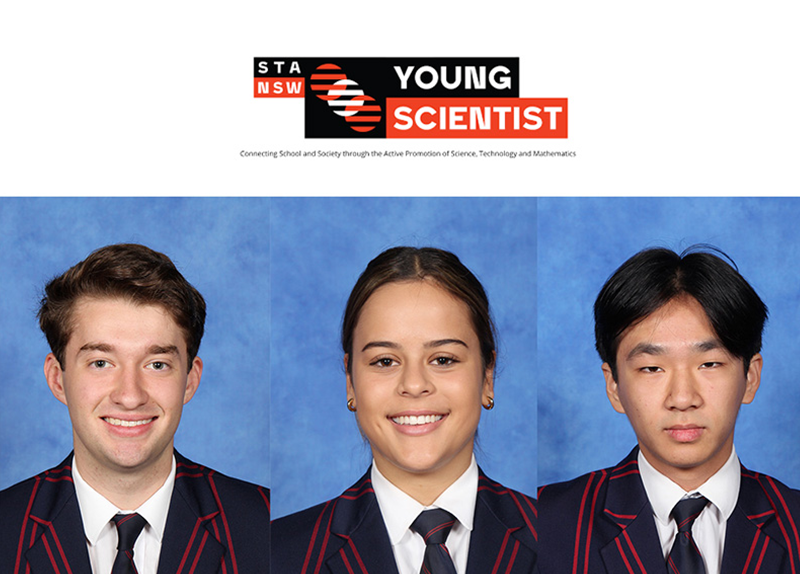 Year 12 (Class of 2021) students Liberty, Harry and Max have been recognised as STANSW Young Scientists. The School is so proud of these three students who have achieved this award in what has been a challenging year.

Liberty Jacob was announced as the 2021 Young Scientist of the Year and International Science and Engineering Fair (ISEF) Finalist 1 for her Walking Tall Project. The Walking Tall project allows older adults to engage in longer periods of upright stable activity – prolonging the use of muscles which decreases the likelihood of falling.

Liberty recently addressed how it felt to be recognised as the STANSW Young Scientist of 2021.
“It is a complete honour (and also a large shock) to be named a Young Scientist in 2021. With the emergence of STEM programs and career paths being greater, and more supported, than ever, this award and recognition has really opened my previously law fixated mind.

“To say this award was unexpected is an understatement, being someone who does all humanitarian subjects, the title of being a ‘Young Scientist’ is something that will take a bit of getting used to. Initially I was in disbelief that my Design and Technology Major Work was able to meet the criteria of this ‘science’ competition, however I now understand that while the classic sciences of physics and chemistry feature in STEM, the more human side of design, creativity, innovation and entrepreneurship do so equally.

“I have found this really encouraging and the opportunities that this award presents such as going to the USA for ISEF is a life changing opportunity that may propel me in directions I didn’t think were possible,” Liberty said.

As Max reflects on his year, he is ‘grateful’ but did not believe he would have success in the subject particularly in the timeframe required.

“I am very grateful to have been recognised as a Young Scientist. At the beginning of Year 12, I did not have very high hopes for the subject. To construct a functioning prototype in the space of one year seemed daunting, but it was only because I was surrounded by such supportive teachers and peers that I was able to do so.”

Harry Breden was awarded third place in the Physics Year 11-12 category for his research on the Boundary of Chaos: An investigation into the Length Ratio Dependent Chaotic Dynamics of a Planar Double Pendulum. Looking at what different points the pendulum produces chaotic motion.

“This recognition feels pretty good, especially with the work I put into the project. It was more than necessary for the application itself. I was motivated to do it and to get the recognition from the competition was surreal. To have someone, a judge, to see my work and recognise it, that’s inspired me.

“I used the computer simulation to work out the results, and it took quite a while. A lot of rewatching of lectures to wrap my head around what was going on and approximately five months of work”, Harry said.

Mentors have played a significant role with these projects and each student wanted to thank the valuable input of those who guided them throughout the process.

Liberty: “In regard to a mentor during this process I can look no further than my amazing teacher Mr John Dennison. Without his consistent support, encouragement and push, my project would not have been successful. I am beyond grateful for his mentoring in his project and I could not have done it without him. The help of Mrs Sally Filtness and Mr Phil Barden were also instrumental in the process”, Liberty added.

Max: “My teacher Mr. Phil Barden was always willing to go to extra lengths to provide us with the resources we needed, and he dedicated hours of school and personal time to help us even during the difficult circumstances of lockdown and restrictions. At home, my Dad was my biggest mentor and taught me many new skills throughout the project.”

Harry: “Dr Hill acted as my research supervisor throughout the project as well as Dr Gates and Dr Terrett. Dr Hill helped a lot and was someone I could go to for advice and an outside perspective. In particular, the way in which I wanted to present the project, we bounced ideas and he assisted with the final solutions”, Harry added.