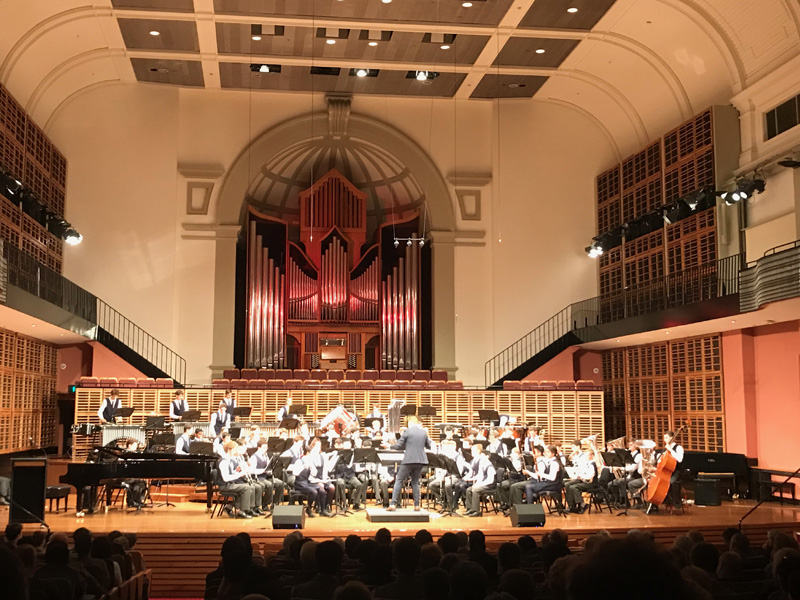 The performance quality of Barker’s Senior School bands has been recognised with four gold awards at the Australian School Band and Orchestra Festival, held at the Sydney Conservatorium of Music at the end of July.

This is the largest music festival in the country with over 300 school bands performing each year and Barker was the only school in NSW to enter four high school bands and walk away with four gold awards.

Over 200 Barker students from the Symphonic Wind Ensemble, Senior Concert Band, Middle School Wind Orchestra and Middle School Concert Band participated at this Festival. Each band performed a range of repertoire; modern wind band music as well as transcriptions of pieces that are centuries old.

Director of Barker Music, Mr Simon Smith, said, “Each band played exceptionally well and were praised by the adjudicators for their brilliant sound quality, attention to detail and the interpretation of the music.

“Each Barker band earned a Gold Award, which is the second year in a row that all bands have achieved this. As one of the largest band programs in the country, it is a huge honour to be recognised by some of the top musicians and adjudicators nation-wide.”

Jodie Blackshaw, renowned Australian Composer and adjudicator of the top section of the Festival praised the Barker Symphonic Wind Ensemble.

“They’re spectacular! The joy expressed was remarkable and so incredibly musical,” she said.

Barker’s Director of Bands, Mr Andrew McWade, also received the ABODA (Australian Band and Orchestra Directors Association) Award for the conductor that prepared the most challenging, entertaining and musically professional performance of the festival. This is the third year in a row that Mr McWade’s challenging and entertaining musical performance has been recognised.