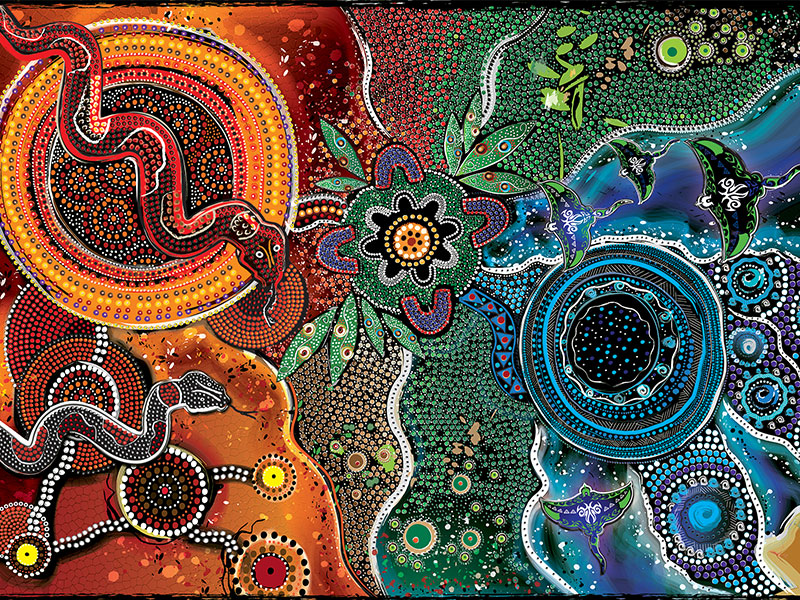 This term we were proud to launch the Geuram Barker artwork, designed by Ethan Landy-Ariel, a Year 11 student at Barker College and a Meriam man from Mer (Murray) Island, with Aboriginal heritage.

The artwork represents the coming together of cultures and communities.

Ethan Landy-Ariel, describes the painting’s centre as showing “all of our cultures come together into one big family in one place”. Geuram is Ethan’s tribe, and also represents the snake totem, bringing together the Aboriginal and Torres Strait Islander elements of the work.

The painting’s left-hand side represents the Aboriginal cultures of Mainland Australia, and portrays snakes – representing the earth and the Rainbow Serpent – moving over the land, painted in the colours of the Aboriginal flag – red, yellow and black.

The background represents the blue-green of the ocean and the red-brown of the land, the Country that is the source of culture, history, lore, food and spiritual sustenance.

The snakes slither across the land, and the manta rays glide through the ocean, symbolising how culture flows from generation to generation. This also represents our goal of students of many different backgrounds, languages and cultures joining the Barker community with ease.

In the middle of the painting, the crossing over of blue-green of the ocean and the red-brown of the desert in the background represents the fertile coast where Barker is located. The leaves represent the eucalypts of the Hornsby Plateau and our campus. The white lines represent many peoples’ different paths coming together at Barker as a place of learning and reconciliation.

Ethan’s design was digitised by Glenn Quevedo, Barker’s Publications and Media Coordinator. Ethan approved the digitisation at every stage, and Ethan and Glenn worked together to bring Ethan’s vision to life. The process started in April 2019 and was completed in September.