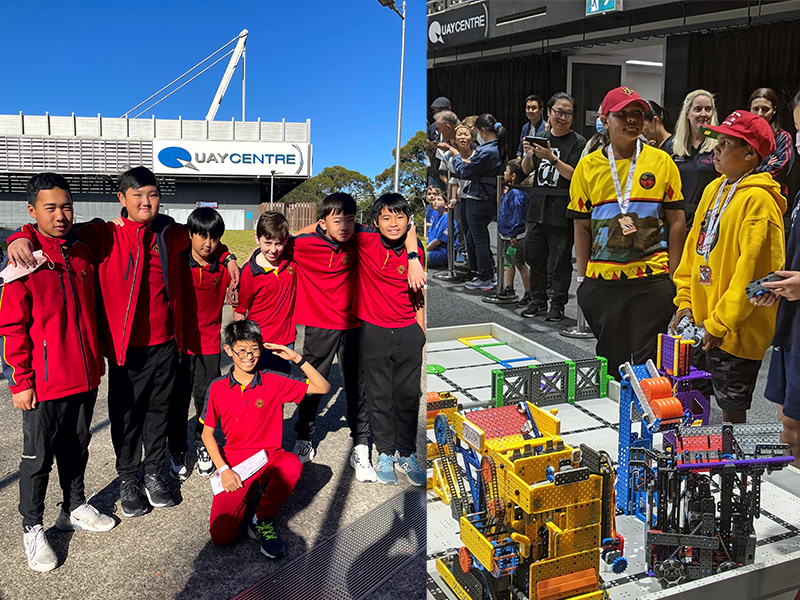 Barker Robotics teams from all campuses in Dhupuma, Ngarralingayil, Darkinjung and Hornsby participated in the Australian National Championships on 3-4 December at Sydney Olympic Park.

The teams from VEX IQ, VEX EDR Middle School and Secondary School competed with the best in Australia! Our students enjoyed alliances with students from other schools to compete with their skillfully built robots.

The Senior School team (Greybacks) is currently on top of the leaderboard to and hope to secure a place at the World Championships in 2023, but will need to wait until early next year before they receive the news. The team qualified second at the competition, received the Think award and were a finalist.

Excitingly, the Dhupuma Barker team, Djirikitj Firebirds, have officially qualified for the VEX Robotics World Championships 2023. They will be heading to Dallas, Texas next May to take on the world, representing their school, community, and country.

Cyrus, Richard, Sean, Justin, Andrew, Whitney, Jasmine, and Mikayla competed against 38 other groups to build and direct a robot through a series of challenges.

Head of Barker College, Phillip Heath, said the team had a joyous and positive experience throughout the competition.

“They had the most marvellous week exceeding our highest hopes, and our hopes were high,” he said.

Mr Heath said the competition was ranked against two criteria and he was incredibly proud of the team’s results.

The first category focused on the skill used to design and build the robots, and the Djirikitj Firebirds topped Australia in their elementary stage division.

The second category focused on matches against other teams’ robots.

The Dhupuma Barker School students started the two-day competition off in 10th place, escalated to sixth place, and completed the weekend’s events in fourth place.

“The heart-stoppingly wonderful result was that they qualified for the international championships in Dallas, Texas,” Mr Heath said.