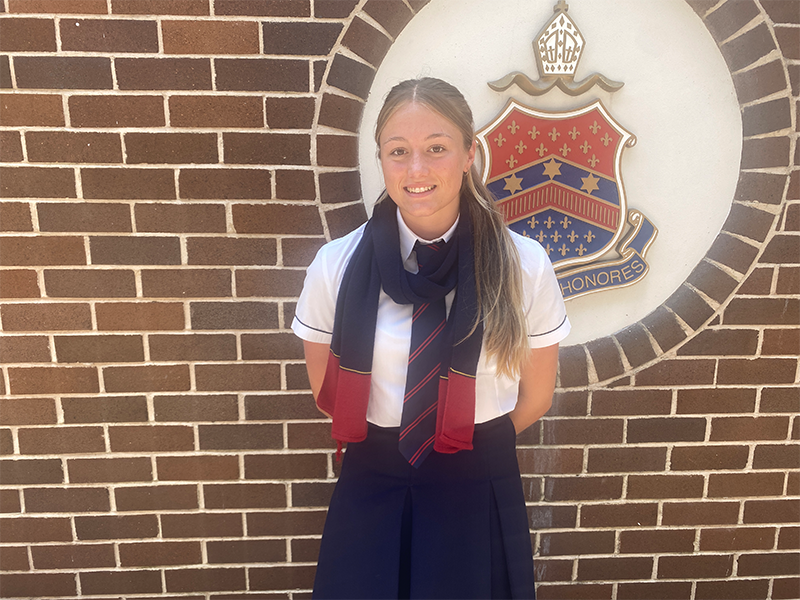 I am proud I understood and recognised the situation early: Analise

A brave and courageous Year 12 student (Class of 2022), Annalise Kibble, recently saved a 6-year-old boy and father after getting caught in a rip at Newport Beach on a Tuesday afternoon.

On October 26, Analise’s surf life saving training did not finish up as expected. It was, however, what she had been training for.

After wrapping up training, it was just after 5:30pm when she saw some heads bobbing up and down over the waves. A father was attempting to hold up his 6-year-old son, before raising his hand whilst struggling in a rip.

The notorious area of Newport is known to locals and surf life savers, which had Analise and her coach on high alert.

“I am proud that I understood and recognised the situation early. It was only a week ago that I had renewed my proficiency training. It was reassuring to know that I’m able to assist and help out when needed.

Luckily, Analise was still holding her board and went straight into the water without a second thought. Instinct kicked in and she was off.

“I was shocked with how young the boy was, he was so little, I just scooped him on to my board. The waiting for my friends to assist, was quite intense as it was just me with my board. The waves were strong, you were crashing and flipping over as well as trying to keep the boy upright,” said Analise.

With the beach having been closed all day, and the waves almost “6 feet tall” according to Analise, she was shocked to have seen they had gone swimming.

“I was talking to my coach, after we finished the session and it was a pretty big day, at least 6 feet of surf, a lot of water moving, the beach had been closed all day and lifeguards had left. My coach brought to my attention and asked, ‘do you think they’re alright’?

Next minute, you could see the dad shoot his hand up, as he was trying to hold his son up, but they were both dipping. I still had my board with me and ran straight down the beach they were probably 200 metres north of the surf club.

I ran straight down, got in the water, and reached them pretty quickly. Back wash pulled me straight to them. I got there, and basically grabbed the son, made him hold on to the board and then turned around the dad was hanging on as well.

I signalled for extra help, and my friend Emily ran down with her board, and another boy also ran down just in case. We noticed the eldest son of the family had also swum out to see if he could help. He was only eight years old.”

The relief poured over Analise’s face once they reached the shore. After the rescue, Analise and her friends spoke with the little boy to make sure he was ok.

“He was shocked and overwhelmed with what had happened. Very distressed. It was an introduction to the beach as he was about to start nippers the following weekend,” added Analise.

A sobering reminder to all families and students to be careful, and proactive whilst enjoying the beach this Summer.

“Be aware of the dangers of the beach, and if you’re unsure or have any hesitation about going in the water, make sure it’s safe. If the flags are up, go between the flags. If someone from the surf club is there, go check the surf conditions with them,” Analise stressed.